For Kerry McLean it all started with the first monocycle he built in 1971 (pictured above) and after his first ride he was smitten with the bug to make it better. Kerry has been building his unique monocycles ever since then and he continues to refine his creation with each new model. Kerry has developed and sold numerous versions of his monowheel, the smallest which is powered by a 5 hp Briggs lawn mower engine and his largest model is powered by a Buick V8 engine!

A McLean Monocycle displayed at Discovery World in Milwaukee 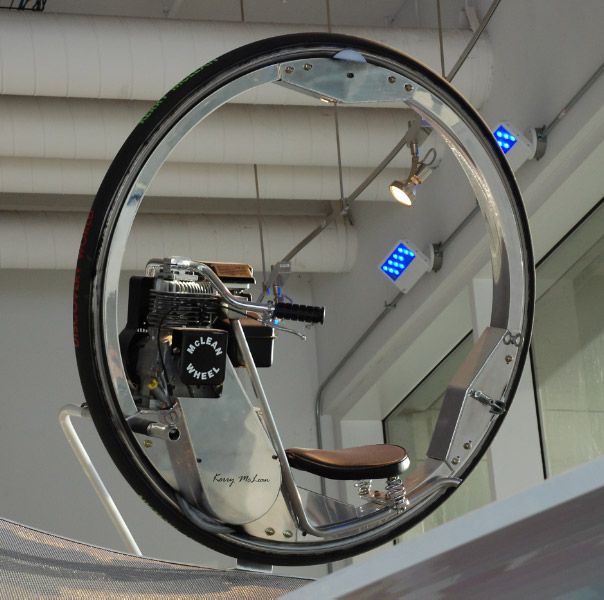 I think we all know someone who can do just about anything… Well for me, that person is my friend, Kerry McLean.

WXYZ Interviews Kerry About His Monocycles

Kerry and his crazy creations have been seen on the TV shows and commercials around the world, including Ripley’s Believe It or Not, Auction Kings, The SyFy Channel and more.

Kerry has set a number of Land Speed Records on the Bonneville Salt Flats with his monowheels, including the one he set on his Electric Barstool! The barstool was recently auctioned off on the Auction Kings TV Show. Man that thing was fast!

Thank you for your interest and support. I hope you enjoy the unique inventions built by Kerry McLean.